The project staff again in Salzburg. The focus was the meeting with the stakeholders of the Salzburg Lakes Region, a highly energy-efficient cross-border pilot area

The project staff again in Salzburg. The focus was the meeting with the stakeholders of the Salzburg Lakes Region, a highly energy-efficient cross-border pilot area

On 12 and 13 July, at the meeting held for the second time in the RSA iSpace Center (Research Studios Austria) in Salzburg, the partners met with two important objectives: to test the framework for the optimal planning of energy systems focused on needs of the pilot areas involved and meet stakeholders and authorities of the Salzburg Lakes Region to illustrate the progress of the project activities regarding specifically their territory and collect their feedback. The researchers of RSA iSpace – Markus Biberacher and Fabian Hofsäß have illustrated the first results of the research activities which concern in particular the optimization of the district heating networks already present in the area through the Rivus system, an integrated platform that allows to simulate energy systems complex based on spatial, economic and technical data.

The meeting was attended by Gerhard Pausch from the Salzburger Seenland Regional Consortium, which is responsible for the “Climate and Energy Model Region” program, and Pausch affirmed his interest in the IDEE project, where cooperation between research, municipal partners and network managers local warming can lead to concrete results to be put into practice in the immediate future.

Walter Gigerl, Deputy Mayor of the nearby village of Seekirchen, also took part in the meeting because he was interested in the topic of energy having been responsible for the project for the district heating plant in his municipality. 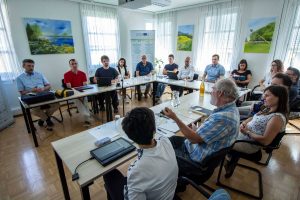 The meeting continued with presence of the Mayor of Seeham Peter Altendorfer who took participants on a visit to the biomass heating system that supplies heat to most of the country. This is therefore an already best practice example of an efficient energy system. 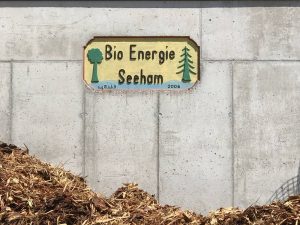 The next meeting, scheduled for the late autumn, will take place in Maniago – the pilot municipality for the Friuli area. The results of the energy consumption survey carried out among the population, the possible scenarios that are emerging at the level of designing efficient energy systems for the territory of Maniago and the related economic and environmental assessments will be presented to local stakeholders.

IDEE BACK TO SALZBURG: MEETING BETWEEN PARTNERS AND WITH STAKEHOLDERS OF THE LAKES REGION TO MAKE THE POINT ON THE ACTIVITIES OF THE PROJECT